Naomi is an executive advisor, Lecturer at the Stanford Graduate School of Business, and leading expert in the intersection of humor and business. She facilitates interactive sessions for the boards and leadership teams of Fortune 100 companies and nonprofits. Versed in behavioral science and human perceptions, she advises executives and celebrities on topics ranging from leadership presence, to media appearances on Saturday Night Live and The Today Show, to political campaign strategies, to creative marketing assets.

Naomi’s work on the power of humor has been featured in The New York Times, The Wall Street Journal, Fast Company, Forbes, and Good Morning America. Her media coaching was featured in Sports Illustrated. Her pioneering research on team chemistry was the cover story of the Harvard Business Review and led to Naomi co-writing and producing a music video on the topic (in which she cameos as Janitor #2).

She is the national bestselling co-author of Humor, Seriously, which was named one of 5 Business Books That are Surprisingly Fun to Read by Adam Grant, Susan Cain, Malcolm Gladwell, and Dan Pink. It’s been called “eye opening and utterly enjoyable” by Arianna Huffington, and “a smart and funny book on how to be smart about being funny” by comedian Sarah Cooper — who added “and I’m not just saying that because they say I am smart and funny in it.”

Naomi earned her MBA from Stanford’s Graduate School of Business, her BA in Economics and Psychology from Claremont McKenna College, and is formally trained in improv and sketch comedy at The Upright Citizens Brigade Theatre in Los Angeles. In her spare time, she teaches improv in San Francisco’s county jail, backpacks in the Sierras, and fosters a revolving door of rescue dogs whom she adores and who systematically destroy everything she owns. 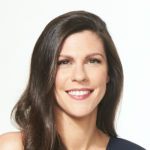 Naomi Bagdonas & Jennifer Aaker on Laughter and the Path to Connection

Naomi Bagdonas on Humor’s Impact on Our Wellbeing

Naomi Bagdonas and Jennifer Aaker on Their Journey Into Humor

Naomi Bagdonas on Not Taking Yourself Too Seriously