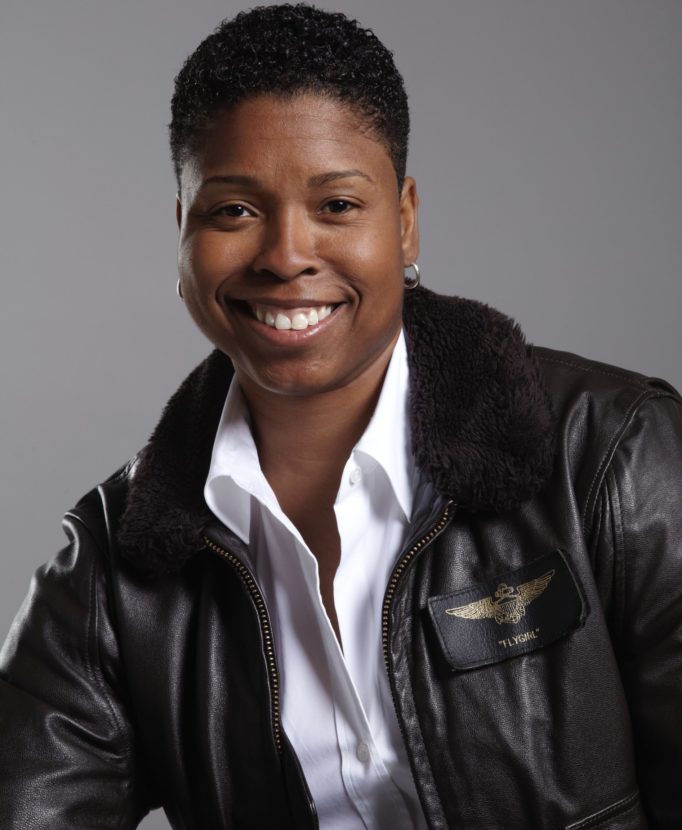 A gutsy trailblazer, Vernice "FlyGirl" Armour's resume is an impressive collection of "firsts" including America's first black female combat pilot. She served two tours of duty in Iraq as a Marine and was a Diversity Liaison Officer to the Pentagon for Marine Corps Headquarters. As a speaker, FlyGirl helps individuals and organizations get gutsy and create a sustainable inner force that propels them forward. FlyGirl is author of Zero to Breakthrough, the 7-Step, Battle-Tested Method for Accomplishing Goals That Matter.

Combat tests you. Being a beat cop tests you. Life tests you. Three brothers and being the only girl…tests you. Vernice “FlyGirl” Armour has been tested her whole life. A gutsy trailblazer, her resume is an impressive collection of “firsts” including America’s first Black female combat pilot. She served two tours of duty in Iraq as a Marine. She was also a diversity liaison officer to the Pentagon for Headquarters Marine Corps. After her military service, FlyGirl revved up her career in the private sector as an entrepreneur, consultant to business, and author of Zero to Breakthrough, The 7-Step, Battle-Tested Method for Accomplishing Goals that Matter. As a speaker, FlyGirl unleashes hard-hitting advice and amazing anecdotes from her adventures on the battlefield and in business. She helps individuals and organizations Get Gutsy and build a sustainable inner force and conviction, that results in accomplishing significant goals.

In 2007, FlyGirl launched VAI Consulting & Training, LLC. Through that work, she helps individuals and organizations make gutsy moves and create breakthrough results by applying her “Zero to Breakthrough™” Success Model – a mindset that helped to propel her career and kept her safe in air combat. FlyGirl regularly takes her message to premier meetings and conferences worldwide and is a Gutsy Confidence Mentor for elite senior executive Women in Tech.

As a Black gay woman and single mom, FlyGirl brings vital experience to her role as a member of the Forbes School of Business & Technology Board of Advisors and COMCAST/NBCUniversal Joint Diversity Council.

FlyGirl has two honorary doctorates and has received numerous awards as a pioneering pilot, including honors for her commanding role in Science, Technology, Engineering and Mathematics (STEM).

Vernice “FlyGirl” Armour’s story has been featured in the media including on CNN, MSNBC, The View, FOX News, Oprah Winfrey and many more, along with being a running back for the San Diego Sunfire professional women’s football team and two-time title holder of Camp Pendleton’s Strongest Warrior Competition.

She is currently working on her next book, The Gutsy Move. Vernice Armour on The New DEI Conversation and Social Justice

Vernice Armour on Giving Yourself Permission

Vernice Armour on Listening to Your Inner Voice