I was blown away by Platon - I and everyone else laughed, cried and truly felt inspired. One of the best speeches I've ever seen (if not THE best).

A master photographer with a penchant for getting the world’s most powerful people to showcase their humanity, Platon proves that an image is just the beginning of the story.

Platon is a gifted storyteller and master photographer, having photographed more world leaders than anyone else in history, including six American presidents. His evocative portraits showcase the stories of both the privileged and the deprived – to break down personal barriers and capture people’s truth.

To him, taking one’s portrait it is an intimate collaboration and a visual interview, both in front of and behind the camera. “My job is to tell the truth and to capture someone’s spirit on a certain day,” he says. “And it's never the whole truth; it's the truth I experience in a very intense and intimate fashion.”

The British-born Platon has produced stunning portraits of some of the world’s most prominent figures – from Barack Obama and Mark Zuckerberg to Muhammad Ali and Hugo Chavez. His photographic works have graced the pages of an array of influential international publications, including The New York Times, Rolling Stone, Esquire, Vogue, and Vanity Fair.

Over his storied career, Platon developed a special relationship with TIME, producing over 30 cover photos for the magazine. In 2007, he photographed Vladimir Putin for TIME’s Person of the Year cover. The image, featuring the inscrutable visage of the Russian leader, won him first prize at the World Press Photo Contest.

In 2008, Platon became the staff photographer for The New Yorker, where he has produced a series of large-scale photo essays, including President Obama’s inauguration, the U.S. military, portraits of world leaders, and the civil rights movement. Additionally, he covered the emergence of civil society in Russia, which earned him a Peabody Award.

Platon also creates haunting images of everyday people – including grieving parents who’ve lost their children to war, human rights defenders around the world, and survivors of sexual violence in the Congo. It’s this work that powers his nonprofit foundation, The People’s Portfolio, where he aspires to create a visual language that breaks barriers, expands dignity, fights discrimination, and enlists the public to support human rights around the world.

“I’m turning the lens away from power to the people who have been robbed of power, to try and create a new set of cultural heroes that will not make us feel guilty, but will inspire us to be better,” Platon says.

His belief in the power of storytelling is rooted in a background in the arts. His enduring gift is his ability to communicate with everyone he encounters – seeing through the mask of leadership, celebrity, and even pain, to find the common thread that connects us all: our humanity.

Platon has published two monographs. The first, Power, is an unprecedented anthology of 120 intimate portraits of world leaders from across the political spectrum to create a profound portrait of global power. Shot over a three-year period at the United Nations, and captured with unique candor and insight, these photographs offer an intimate glimpse at the personalities behind the public faces of the world’s most powerful decision-makers.

The other, Service, highlights the valor, emotions, and physical and psychological wounds of men and women in the U.S. military. His work has been exhibited at some of the world’s most prestigious galleries and museums, including the Scotland National Portrait Gallery in Edinburgh.

In his presentations, Platon also shares the stories from his photo essays on the civil rights movement, his work with Human Rights Watch featuring the leaders of the Egyptian revolution, his photoshoot for TIME of Aung San Suu Kyi, and, most recently, his experience photographing Edward Snowden in Moscow for his exclusive interview with Wired magazine.

With audiences, Platon is energetic, impassioned, and soul-stirring, as he explores the highs and lows of humanity through his portraits. Using his platform as a speaker, he explores what it means to be a great leader, using his famous and everyday subjects as examples. Tying in his message of empathy, open dialogue, and unity, Platon encourages listeners to connect deeply and challenge perspectives — in order to find common ground and propel forward.

REKINDLING THE SPIRIT OF OPTIMISM

In times of rapid transformation and increased divisiveness, Platon believes we need to tap into our common humanity to bridge the divide and rekindle the spirit of optimism. “We can create positive change,” he says. “Not in spite of our differences, but because of them.”

Relevant to:
GETTING BEHIND THE MASK

Platon believes that everyone wears a mask – and for a variety of different reasons. With his up-close-and-personal experiences encountering people in power and those who are less privileged, he reveals how he is able to see behind the mask to reveal the authentic person within.

Visual language can break barriers, amplify dignity, fight discrimination, and enlist the public to support human rights for all, believes Platon. By creating compelling visual advocacy, he promotes compassion and responsible citizenship. Through powerful storytelling, he encourages people to act on today’s most pressing issues.

Platon at WEF on Art as Bridge Building

Platon - The Most Powerful Photo of the 2008 Election

The Power of Unity: Rekindling The Spirit of Optimism

A master communicator and storyteller, Platon has photographed a unique mix of subjects across the globe — ranging from the world’s most powerful to everyday people.

Through his up-close-and-personal experiences with disparate figures, Platon pulls back the façade of our differences to reveal our common humanity. In a call for unity, he shows how we can wield mankind to rekindle the spirit of optimism and propel ourselves forward.

At a time of great transformation and extreme divisiveness, “we can create positive change,” he says. “Not in spite of our differences, but because of them.”

Platon leaves audiences enthralled as he explores the poignant and riveting stories behind his renowned portraits, showcasing his unique ability to penetrate the barriers of his sometimes-wary subjects. He reveals the lessons in leadership and compassion that he’s learned from some of the world’s most prominent figures— like Donald Trump, George Clooney, Mohammed Ali, Mark Zuckerberg, Edward Snowden, Stephen Hawking, Nobel Peace Prize Laureate Dr. Denis Mukwege, and other heads of state, U.S. Military heroes, and human rights champions — and how they can be applied to our everyday interactions.

“Something is fundamentally shifting in the values of our society,” says Platon. “It is time to celebrate a new set of cultural heroes: those who inspire us with their courage, and move us with their integrity and compassion for fellow men and women.”

Memorable and soul-stirring, Platon’s unique and emotive presentation promises to bring people together to embrace new perspectives, bridge divides, and create a stronger sense of belonging. Taking listeners on an emotional journey, from laughter to tears to reflection, he’ll leave your audience wanting more from this master of his craft.

In this follow-up to “Powerful Portraits,” master photographer Platon shares a career’s worth of lessons learned from interacting with some of the world’s most prominent figures — including Donald Trump, George Clooney, Mohammed Ali, Mark Zuckerberg, Edward Snowden, Stephen Hawking, Nobel Peace Prize Laureate Dr. Denis Mukwege, and other heads of state and U.S. Military heroes.

Sharing the stories behind his iconic portrait sessions, Platon teaches audiences how to spot the opportunity to create a meaningful connection – revealing his near-foolproof way of breaking down barriers, especially in times of great division.

With massive disruption infiltrating industries, a looming recession, and growing filter bubbles, the Fourth Industrial Revolution is marred by complexities, discomfort, and change. Businesses, at the same time, are also being tasked with communicating purpose over profit, in order to drive employee engagement and customer loyalty.

“In a fast-paced environment with increased transparency, leaders need to spend more time thinking about people, and how we relate to each other,” says Platon. “We must dare to be transformative, instead of reactive,” he adds.

This presentation places a few members of the audience in the frame, as Platon emphasizes the importance of building teams and creating a sense of belonging, in order to propel people and organizations forward.

Using an anecdotal and interactive approach, he offers this workshop as a learning tool for those who are interested in strengthening their ability to create trusting, respectful, and productive business and personal relationships – as explained through the intimate meetings and experiences with various cultural icons.

Platon was one of the best perspective on life speakers I have ever heard. Looking at life through an artist's eyes was an amazing experience.

Platon went over very well with our group—both during his presentation and later that evening at dinner. He was approached by many of our folks with questions or comments about his work. His presentation was insightful and thought-provoking, just what we were hoping for.

I was blown away by Platon - I and everyone else laughed, cried and truly felt inspired. One of the best speeches I've ever seen (if not THE best).

Overall, I thought this conference was excellent. Platon was the best speaker I have ever heard and his presentation was life changing.

Platon was amazing. Hands down the best speech I have ever heard. Moved me to tears!

Platon was excellent. It was obvious from the reaction of our participants that he had them thoroughly engaged with his photos and stories. The relevance of his presentation to the material we were presenting that day was also quite strong, and we found ourselves referring back to his stories quite often over the next two days to reinforce the central points of the training.

As you might imagine after 40 plus years in this industry, I have been to a lot of meetings and heard many speakers. My wife, Susan, is a retired exec. of AT&T and Convergis. She too has heard her share. Platon Antoniou brought tears to the eyes of both of us, and after his talk, we both felt the he was the best we have EVER heard."

Platon was fabulous! Our audience LOVED him. He was exceptional!

Platon is one of those wonderful and most rare speakers where the audience arrives intrigued—but not quite sure what to expect—and then leaves completely blown away. He is a masterful storyteller, with his photographs and with his accompanying presentation. Simply one of the best.

Platon was spectacular! Yes, off the charts sensational! He was charming, funny, a wonderful story teller and the perfect ending to our meeting. It was really nice to feature something so visually exciting as well. Thanks for the good guidance that helped me select him.

He was so wonderful! The feedback we received was 100% positive. We were moved, we cried, we laughed with him. Our guests were riveted, nobody moved or made a sound except to laugh or stifle a sob when we couldn’t help ourselves. We listened intently and were taken on a journey. What a gift that afternoon was. We all got back to basics – human connection, empathy, love, humor, amazement… He was kind and patient during sound check and he stayed afterward, mobbed by our group who all wanted to meet him. It was a distinct honor to have met him myself and I can’t wait until the next opportunity to hear him speak.

Power: Portraits of World Leaders (opens in a new tab) 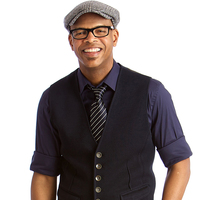