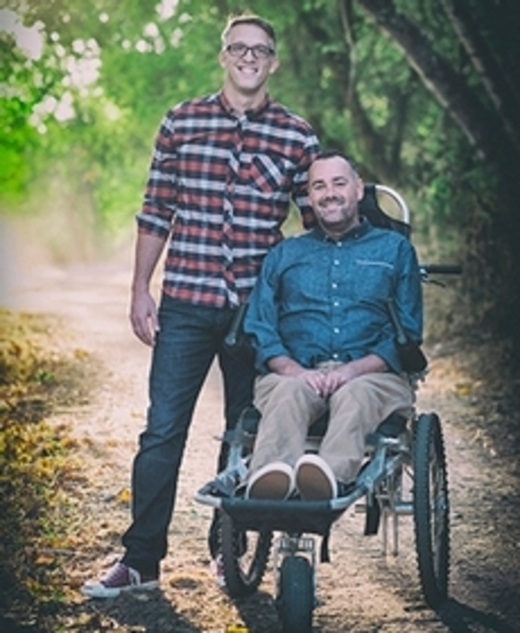 Born a little over 36 hours apart, Justin Skeesuck and Patrick Gray have been blessed with a lifelong friendship. Their lives have been intertwined for 40 years and have brought them many adventures—most notably, their recent 500-mile trek across the vast terrain of Spain. Justin, who lives with a progressive neuromuscular disease and manages life from a power wheelchair, had the urge to tackle the Camino de Santiago or Way of St. James. When asked, Patrick responded with “I’ll push you!”

Justin Skeesuck and Patrick Gray live by the mantras “Life is not defined by its limitations, it is defined by what is accomplished in spite of those limitations” and “It’s only impossible because we haven’t done it yet.” Though Justin has very limited use of his arms or legs, his insatiable desire to live life and his willingness to be vulnerable have taken him places few dream of. Patrick’s servant heart and fierce determination combined with Justin’s limitless mindset make for a duo that can empower others to move beyond their limitations, aspire to greatness, and achieve the impossible. Their 500-mile journey known as “I’ll Push You” has taken them far beyond the confines of the journey itself. Their heartfelt and hilarious storytelling has placed them in front of universities, health care institutions, Fortune 50 companies and on the TEDx stage. They have been featured and interviewed on NBC, ABC, Fox & Friends, The Huffington Post, People.com, The Meredith Vieira Show and many worldwide news media outlets.

The Impossible is Possible

With the increase in technology, our societies have become increasingly socially isolated. Join Justin and Patrick as they share stories and observations on the impact healthy relationships lead to community, and how a healthy community can take you places you never thought possible.

We live in a society that is quick to point out the limitations individuals possess. But what if limits did not define an individual? What if there was a way to push beyond limitations. Justin and Patrick teach and share how they have defied perceived limitations and achieved what many said was impossible.

Justin and Patrick draw on their work and life experiences, delving into what they believe is the most important attribute of an effective leader: vulnerability. Learn how being vulnerable aided them on their 500 mile journey through Spain and how it can bring strength to your team or business, create loyalty within your workforce, and can generate greatness where stagnancy once prevailed.

Faith in Action: Relying on What You Cannot See

Many thought they were foolish for attempting to walk 500 miles along the Camino de Santiago with Justin living life from a wheelchair. Some even told them they couldn’t accomplish it. For Justin and Patrick, the trek was something they had to do. Knowing full well that they could not be successful on their own, they set out with one wheelchair and two backpacks. Their faith was rewarded as they navigated the vast terrain of Spain, and they continue to take each step of life in faith. Join them as they explore moving from a posture of fear to standing triumphant in faith.

Over the span of my career I have had the opportunity to hear many nationally known speakers and none of them were or are inspirational as Justin and Patrick. They not only inspired us, they moved us. Their easy way with each other and the participants in our conference have earned them a special place in all our hearts. We continue to benefit from the lessons of the road they shared with us. St. Joseph Health gives them two thumbs up!!!

They are 2 of the most kind, genuine, authentic gentleman I have had the opportunity to work with and watch present on stage. They were just so complimentary of all the work we do, and just so happy to be involved. Their story was outstanding and so inspirational. I tried not to cry when I first saw their video during rehearsals, then again, tried not to cry when they actually presented live to the audience. They received a standing ovation from the audience. Their story is powerful and so inspirational. Even just seeing them interact with each other backstage, their friendship is something truly magical. Our audience was truly touched and inspired by their story. A+++++++++++++ It was a perfect way to end the GSM and send off the global sales team with such an amazing story!

I'll Push You: A Journey of 500 Miles, Two Best Friends, and One Wheelchair (opens in a new tab)