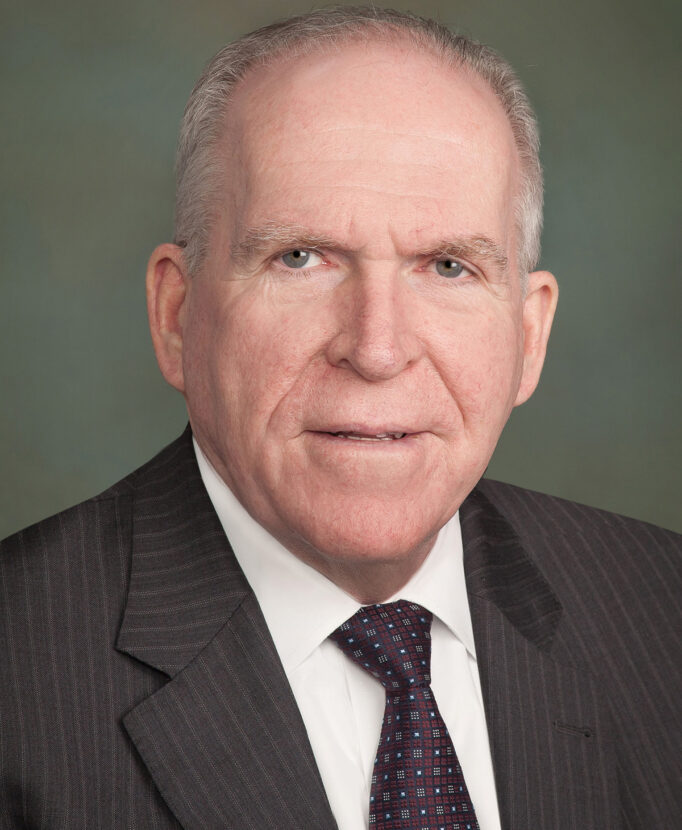 A consummate insider who worked his way up through the ranks to head the Central Intelligence Agency, John Brennan had a front row seat in the turbulent and tumultuous arena of world affairs for more than three decades.

“Through the course of my career, I’ve had the great fortune of being in meetings with the world’s most notable leaders at critical times of world history,” he says.

Before being tapped to head the CIA, Brennan served as the CIA’s daily intelligence briefer to President Bill Clinton, the founding director of the National Counterterrorism Center during President George Bush’s administration, and Assistant for Homeland Security and Counterterrorism and Deputy National Security Advisor for President Barack Obama.

After a lifetime in the intelligence community, Brennan now serves as a Senior Intelligence and National Security Analyst at NBC and MSNBC, where he offers his opinions with his unvarnished, shoot-from-the-hip delivery. He is a Distinguished Fellow at the Center on National Security at Fordham Law School, a Distinguished Scholar at the University of Texas at Austin, a member of the Board of Trustees of the International Institute of Strategic Studies, a member of the Board of Directors of ImmunityBio Inc, and an advisor to a variety of private sector companies. He is the author of the New York Times bestseller, Undaunted: My Fight Against America’s Enemies at Home and Abroad, a memoir of his career in public service.

Brennan teaches audiences how to think about and act quickly in response to global events, terrorism, and cybersecurity concerns. Pensive and articulate, he details his pragmatic take on global trends, while expertly exploring issues of national security, foreign policy, governance, and the rule of law.

Offering an insider’s look at the shifting global landscape, Brennan reveals what it takes to remain an effective player in business, while keeping pace with the alarming proliferation of cyber threats. Drawing on his experience spearheading a comprehensive restructuring of the CIA, he discusses the importance of organizational agility and what it takes to implement major change.

John Brennan on the Russia – Ukraine Conflict: Analysis and Outlook

John Brennan was so fabulous!! He was a dream of a guest — very friendly and so fascinating at the same time.

John Brennan was a powerful addition to our Annual program. He made our members think and ponder. We were so pleased to have him part of the event!

Director Brennan was a delightful speaker and extremely well received by the students who participated in the discussion and the audience at the Mayo PAC. So many of us were impressed with how well he handled the Q&A – so many different topics. It was a pleasure to work with you on this event as well. You made the event – from contract, to marketing approvals, to logistics – very easy for us!

Brennan was more than awesome. Very candid, engaged well with the audience and during the Q&A. Needless to say, he was the star attraction.