Former Chairman of the Board and Chief Executive Officer, 3M

Inge G. Thulin, Former Chairman of the Board and Chief Executive Officer at 3M, spent four decades inside of one of the world’s largest public companies. A champion for change, he elevated and diversified the business to rank among today’s most ethical and respected brands.

Inge G. Thulin, Former Chairman of the Board and Chief Executive Officer at 3M, spent four decades inside of one of the world’s largest public companies. A champion for change, he elevated and diversified the business to rank among today’s most ethical and respected brands.

Inge Thulin began his career with 3M Europe in 1979, and assumed key roles in marketing, sales, and management until 2003, when he was appointed 3M’s executive vice president for international operations. In 2011, Thulin was named executive vice president and chief operating officer. In February 2012, he was appointed president and chief executive officer, with the subsequent addition of chairman of the board. Thulin served as chairman, president, and CEO until July 2018, when he became 3M’s executive chairman of the board until his retirement in June 2019. During Thulin’s tenure as CEO, 3M’s market cap increased from $61 billion to $117 billion. In addition, Thulin has historically been a champion for Women in Leadership and fostering a more inclusive workplace. His concerted leadership efforts to bring Diversity and Inclusion to the forefront of his business earned him the 2017 Catalyst Award.

3M is a science-based company, and under Thulin’s leadership 3M accelerated investments in research and development, while also elevating the company’s brand promise of 3M Science. Applied to Life.™ Thulin also led significant actions to strengthen and focus 3M’s portfolio of businesses, which included realigning from 40 businesses to 22, while making strategic acquisitions and divestitures.

3M consistently ranks among the world’s most admired, respected, and ethical companies. 3M has been named to Ethisphere’s list of the World’s Most Ethical Companies for six consecutive years. 3M was also recognized as the company millennials would most like to work for, topping the 2016 Millennial Career Survey from the National Society of High School Scholars.

Sustainability is engrained throughout the company’s portfolio of businesses. For the 19th consecutive year, 3M was listed on the Dow Jones Sustainability Index in 2018. A strong believer in teamwork and collaboration, Thulin has invested significantly in leadership development programs for 3M’s people. The return on this investment is reflected in 3M’s recognition on Chief Executive Magazine’s 2016 list of the Best Companies for Leaders. 3M was also a winner of the prestigious 2017 Catalyst Award – which recognizes organizations for their commitment to diversity and inclusion – and Thulin is an Honorary Catalyst Champion for Change.

After his tenure at 3M, Thulin became the chairman of the board of The Thulin Group LLC. In 2019, he was appointed to the advisory board of Michael Bloomberg’s initiative of the New Economic Forum. Thulin serves on the board of directors of Chevron, Merck, Patricia Industries, World Childhood Foundation, and the Swedish American Chamber of Commerce in New York. His external global business engagement includes membership on the Business Council and Council on Foreign Relations, and in 2018 he was a founding member of the New Economy Forum. In 2015, Thulin served as chairman of the Greater Twin Cities United Way Campaign. From 2007-2012, he served on the board of directors of The Toro Company. 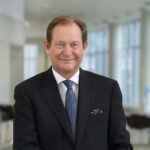