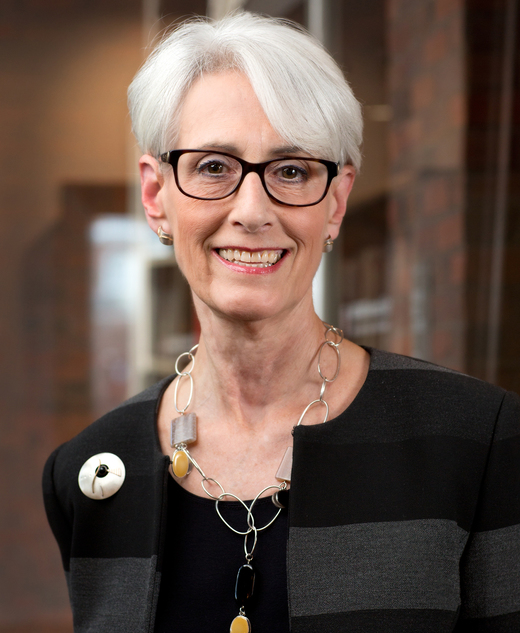 Wendy R. Sherman is a professor of the practice of public leadership and director of the Center for Public Leadership at the Harvard Kennedy School. In addition, she is a Senior Fellow at the School’s Belfer Center for Science and International Affairs. Ambassador Sherman is Senior Counselor at Albright Stonebridge Group and former Under Secretary of State for Political Affairs.

She serves on the boards of the International Crisis Group and the Atlantic Council, and is a member of the Council on Foreign Relations and the Aspen Strategy Group. Ambassador Sherman led the U.S. negotiating team that reached agreement on a Joint Comprehensive Plan of Action between the P5+1, the European Union, and Iran for which, among other diplomatic accomplishments, she was awarded the National Security Medal by President Barack Obama. Prior to her service at the Department of State, she was Vice Chair and founding partner of the Albright Stonebridge Group, Counselor of the Department of State under Secretary Madeleine Albright and Special Advisor to President Clinton and Policy Coordinator on North Korea, and Assistant Secretary for Legislative Affairs under Secretary Warren Christopher.

Ambassador Sherman, with a Masters in Social Work, began her career as Director of Child Welfare for the State of Maryland. Later, she managed Senator Barbara Mikulski’s successful campaign for the U.S. Senate, served as director of EMILY’s List and ran Campaign ’88 at the Democratic National Committee for the Dukakis presidential campaign.  She served on the President’s Intelligence Advisory Board, was Chair of the Board of Directors of Oxfam America and served on the U.S. Department of Defense’s Defense Policy Board and Congressional Commission on the Prevention of Weapons of Mass Destruction, Proliferation and Terrorism. Ambassador Sherman is the author of Not for the Faint of Heart: Lessons in Courage, Power and Persistence published by PublicAffairs, September 2018.

Presidential Communication in the 21st Century

Where In the World are We Headed?: An Inside Guide to Geopolitics and What It Means for Your Business

As U.S. under secretary of state for political affairs, Ambassador Wendy Sherman became responsible for overseeing the United States’ diplomacy in every region of the world during her time at the State Department from 2011–2015. Sherman is able to offer a unique insider’s view of where the world is headed in the years ahead and how that will affect global business.

Shattering Glass and Leaning Forward – Senators, Secretaries of State, Business CEOs – I’ve Had It All and So Can You

Throughout her career, Wendy Sherman has demonstrated a knack for shattering both glass ceilings and stereotypes. She had a front row seat working on the campaign for Barbara Mikulski, the first Democratic female elected to the Senate, and helped secure and advise Madeleine Albright as the first female secretary of state. Having started her own business as well as having a successful family life, Sherman looks to speak to the leaders of tomorrow to help inspire and motivate you with the secrets to her successes, both personal and professional.

Risk Management: Changing Geopolitics and What It Means for Investment

In her experience, not only as U.S. under secretary of state for political affairs but also as the owner of a successful global business consulting firm, Ambassador Wendy Sherman is in a unique position to offer advice about a myriad of topics that affect the world business scene today. Having sat on the investment committee of a boutique emerging markets fund, Sherman offers an insider’s guide to investment risk wherever you are in the world.

Ambassador Wendy Sherman, lead negotiator on the recently reached Iran deal, and named by The Jerusalem Post as the fourth most influential Jew in the world, sizes up the U.S. relationship with Israel, Iran and the Middle East in a point/counterpoint with another panelist.

Negotiating Change: What Businesses Can Learn from Complex International Negotiations

Wendy Sherman, the successful lead negotiator for the multilateral, complex deal with Iran, reveals strategies and tactics from her years of high-level international diplomacy that can help you achieve successful outcomes in business negotiations in a global economy and marketplace.

Not for the Faint of Heart: Lessons in Courage, Power, and Persistence (opens in a new tab)